WhatsApp me if you interested
ORIGINAL SPS® PEH SQUEEGEE TECHNOLOGY
All SPS® STOP cylinder presses are equipped with the characteristic and unique hydro pneumatic squeegee bridge. The innovative technology and its massive housing have been subject to many attempts to copy. However, none of these copies even came close to the original. Still today, the SPS® PEH squeegee technology is world leading. One of the main challenges in squeegee design and construction for high speed cylinder presses has always been the combination of print start timing and avoiding touching the grippers that would cause vibrations during the first few centimetres of the print and, at the
same time, damage the mesh and the printing edge of the squeegee blade profile. Basically, the squeegee action must be released only after the grippers have passed - but fast enough to not lose too big of a print start margin.
Traditionally a mechanical system in the form of a cam, synchronised with the motion of the cylinder, is used. However, as machines got faster, the drawback of this widely used system became apparent, mainly leading to vibrations during the first 3 cm of the print and resulting in screen damage, caused by the squeegee coming down on top of the cylinder grippers.
In cam controlled systems, the downwards movement of the squeegee bar begins above the grippers on account of the turning point of the movement and ends around 15 mm after this. Under high-speed conditions this however means that the squeegee pushes down the mesh, scratching the top side of the underlying grippers (fig. 1). At even higher running speed, the squeegee actually will set down on the gripper tops.

Another problem is caused by the physical influences on the roller following the squeegee drive cam itself. During the downwards movement of the squeegee (i.e. at print start), the cam control causes a very fast and sudden movement of the cam roller which transmits a certain number of vibrations to the squeegee printing edge (fig.1, fig. 2). These two major problems were solved by SPS® engineers, using the unique technology of the hydro-pneumatic SPS® PEH squeegee bridge. Also this completely autonomous system is synchronised with the machine - but not by means of a mechanical connection.
The SPS® PEH bridge is based on characteristic engineering principles. The main features are:

Setting the squeegee pressure and maintaining it constant during the run is independent from squeegee height adjustment. As long as the squeegee level is kept within the range of the hydraulic damping cushion (i.e. within some 2 - 3 mm tolerance) the actual printing pressure is system-controlled, combined with a manometer or digital pressure read out.
The operator defines the pace; the automatic system will the do the rest.
Using this unique squeegee control system provides even more flexibility: the starting point of the print is variable, changing gripper margins can be set to requirement. Depending on the model within the SPS® STOP cylinder range, also a variable squeegee active path length can be pre-selected.

Further optional equipment is offered, adding to increased production output and improved print quality:
- The two-sided fully automatic motorized height setting of the squeegee results in perfect parallelism between printing edge and cylinder whenever the system is set to go after changing the squeegee blade - fully independent of operator skills. The system is fast, accurate and it reduces wear of the squeegee rubber during the print run (fig. 4).

The SPS® C05™ squeegee blade (exclusively made by RKS for SPS®) is a high-tech combination of a carbon fiber back blade and a resistant squeegee rubber edge in selected quality. The stability of the carbon back supports the control of the active squeegee printing angle. In combination with the SPS® PEH squeegee bridge this will result in outstanding print definition, particularly with fine lines and halftone dots (fig. 5). If needed, the operator-friendly pneumatic holder can be easily exchanged for a standard squeegee profile. 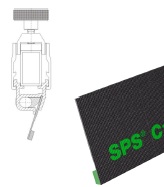